Near-Field Communication (NFC) touchless payments (Apple Pay, Google Pay, Samsung Pay, etc.) accommodate physical distancing at the point of sale, as the WHO encourages the use of contactless payments due to COVID-19. 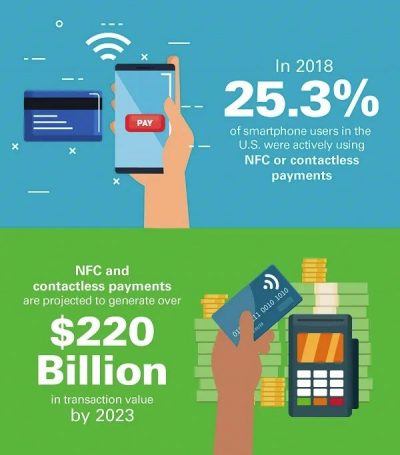 The narrative of COVID-19 continues to evolve and many of us – merchants and customers alike – are more acutely aware of the effects that reducing the amount of contact, in public, have in preserving our health and wellness. We’re sending out this PSA message to promote awareness of using contactless payments in place of credit cards that require a swipe or dipping action to complete a transaction at the point of sale.

As part of the COVID-19 outbreak, central banks have resorted to quarantining physical bills and some are even going so far as to burn banknotes. South Korea’s central bank, the Bank of Korea, has implemented a quarantine policy for physical notes that come in from local banks. They’ll keep banknotes in a safe for up to two weeks, given “that the [SARS-CoV-2, which causes the COVID-19 disease] virus usually dies in nine days.”

As early as February 15th, Chinese lenders were asked by the government to both disinfect bills and keep them in a safe for up to 14 days, depending on what region they came from. The Federal Reserve has also begun setting aside US dollar banknotes from Asia for 7-10 days before recirculating them into the economy. The Bank of England has acknowledged that banknotes in circulation can hold “bacteria and viruses” and recommended that people wash their hands after handling money.

This is why, among other reasons, the CDC is so rigorous about handwashing as a way to reduce infections in general. Well-maintained handwashing reduces respiratory diseases, such as colds, in the general population by 16-21% according to the CDC.

Central banks are by their nature, risk-averse — and so these measures may not fully reflect the actual risk. However, they certainly are a good metric for how central banks think about physical cash in an outbreak.

Because of this concern of COVID-19 potentially spreading infection through physical banknotes, a spokesperson of the WHO has reportedly told the Telegraph that “people should use contactless [payment] technology where possible.” This could be helpful for cryptocurrencies, which can be made completely contactless from a physical standpoint and still allow for the transfer of value a swapping of banknotes connotes.

The COVID-19 outbreak is also likely to accelerate central bank adoption of their own digitized currencies, some run on blockchain solutions. The PBOC, China’s central bank, has looked for some time at replacing physical cash with a digital analog. A Fed official said a real-time digital payments option was “inevitable” and the chief of the Bank for International Settlements also opined that central banks will likely need to soon issue their own digital currencies.

It is likely that this “black swan” event, a virus that may transfer on physical cash, will help accelerate that thinking for a lot of central banks: a hidden disadvantage of physical cash has surfaced that will push forward the trend of digitizing currencies.

If digital currencies are inevitable and accelerated by this recent COVID-19 outbreak — the question becomes who delegates and owns the rules behind them. Cryptocurrencies allow one to avoid physical transactions if needed, and allow for the near-effortless transfer of value between borders. They can be used as a digital format for the transfer of value and slowly erode the usage of physical cash — yet that is not the greatest way the community can differentiate itself.

It is clear that central banks are thinking about how their rules can apply to digital currencies — and in the absence of deliberate action and the continued growth of the cryptocurrency community, the only true viable alternative to analog cash will be digital currencies that replicate the current financial system, bound to central banks that have increasingly resorted to desperate measures to keep economies going, including negative interest rate policy. Instead of a delegated, decentralized, peer-to-peer system of economic value creation, digital currencies backed by central banks will be subject to reactive, centralized bureaucracy.

In a time where contactless digital payments may become the recommended norm, cryptocurrency adherents have a rare opening to advance their argument that cash might become obsolete. Yet, they will win the battle and lose the war if central bank digital currencies represent the bulk of viable options for the vast majority of people.