“I really appreciate New West Technologies. They are always very prompt with my orders and they go above and beyond with any problems that I might have. I look forward to continuing working with them.” ~Melissa Snyder, McMenamins 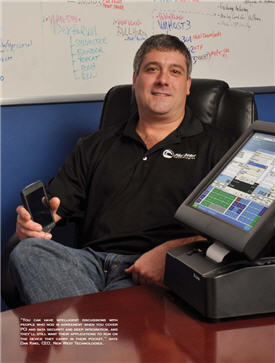 One successful retail-focused VAR offers the key to racking up mobile sales: Ignore the hype, and focus on the fundamentals.

December 15, 2011 – When asked about maintaining discernment amidst a dizzying array of mobile device, platform, and application offerings for retailers, Dan King does what many wise men do. He calls up some advice from his dad. Nothing changes but the names. That’s the fatherly advice recalled by King, CEO of New West Technologies. It’s an admonition that’s helped King, a technophile and self-described poster child for attention deficit disorder, stay grounded during exciting times. Staying grounded is a must for retail tech VARs in an age when taking a flyer on the bleeding edge can cost more than your credibility; it can cost you your business.

Fundamental Flaws Of A Fast-Moving Retail Market
At the core of King’s mantra is the idea that it’s the application, not its name or means of delivery that determines business value. A solidly performing POS application passes its own muster whether it’s served up from a local box, via the cloud, or on a mobile device. It’s the performance of the app, says King, which VARs must focus on in an unprecedentedly fast and dynamic era of development. That creates a challenge for New West and countless companies like it. Too many end users are eager to forego the steak for the sizzle. “The retail industry at large is constantly distracted by all the new things popping up — the hundreds of mobile applications like couponing, loyalty, geolocation, mobile POS and payments, to name a few,” says King.

The result of the advent of consumer devices from the likes of Apple and Android, and more specifically the huge resulting groundswell in the application development community, has created confusion, misconception, and even stalling on the part of end users. The market clearly needs the channel community to help it understand the opportunities mobile applications present and the ROI and TCO (total cost of ownership) advantages and/or limitations of those devices and applications. Turning clarification and teaching opportunities into sales opportunities isn’t easy though. Therein lays the challenge.

Consider that last year, King was engaged in an ongoing conversation with the leaders of a successful organization who wanted to open gift stores and refreshment centers on a large campus. The company runs Great Plains ERP, and New West has a long and successful track record with this type of engagement. “I gave them a detailed plan for their stores, and two weeks later they came back and said the CEO wants to run the whole retail element of the business on an iPad. I explained why that wasn’t only a bad idea, but that it simply wouldn’t work,” says King. “Now it’s a year later, and they’re still searching for that unicorn.” That’s just one example of the sort of misconception VARs and integrators are dealing with in the current market. There’s plenty of innovation and lots of creativity thanks to a plethora of startup development companies squarely focused on mobile platforms, but as a result, King says business users are losing alignment with reality. “The expectation about what software is and what hardware is needed to run it has changed drastically,” says King. “Many small retailers and start-ups think they can buy consumer-grade hardware, and the software will be free and instantaneous. They think you just need a smartphone and PayPal to become a retailer.”

Of course, King’s characterization of the perception of the industry at large is a generalization, but it’s not far from reality. “You can have intelligent discussions with people who nod in agreement when you cover PCI and data security and deep integration, and they’ll still want their applications to run on the device they carry in their pocket,” laments King. “That’s what they know, but it’s our job to have the hard conversations about the importance of compliance, integration, and ruggedized hardware.”

iOS, Android Devices Present Risks, Opportunities
King points out that retail tech solutions providers who are trying to educate business users on the pros and cons of smartphones and consumer-grade tablets often have an ally in the customer’s IT department. “Often, the IT department gets it. They look at Android and iPhone applications as risky,” he says. “IT was not ready for this ‘bring your own device’ notion. They know it’s tough, if not impossible, to integrate to the point that data convergence, accuracy, and security are guarantees.”

You can’t accuse King of being ignorant of the important place iOS and Android devices hold in the industry. In fact, he’s quick to point out that New West has plenty of skunk works projects going on behind closed doors — as any VAR/ integrator/developer its size should — and many of them are being developed for smartphone and tablet platforms. New West already offers Microsoft Dynamics RMS integration for the Magtek iPad, featuring an encrypted swipe device and tokenization technology from Payment Processing, Inc. that addresses PCI validation requirements. The company is clearly ahead of the curve, but it knows there’s a great deal of evolution that must take place before mobile devices become the foundational hardware element of the enterprise. King likens the current smartphone craze to the dotcom boom. “There are hundreds, maybe thousands of organizations writing applications and software right now for an end user market that expects it all to be free,” King says. “They’re building million-dollar data centers to write free applications. It’s not sustainable. It’s a bubble. How many of these start-ups do you think will survive five years?” he asks rhetorically.

How Fundamentals Protect You From The Bleeding Edge
What has survived — and then some — is a 1975 start-up called Microsoft, with which King has built his business since its 1992 inception. Not surprisingly, some of King’s colleagues and advisers prodded him to dip more than a toe in iOS and Android applications, given Microsoft’s more silent and steady approach to the mobile scene. “We’ve stayed the course with the core Microsoft Dynamics RMS [Retail Management System] technologies that we focus on, and that’s proven prudent with the release of Windows Mobile 7,” he says. “New mobile initiatives from Microsoft have allowed us to go wireless with fundamental applications like POS and inventory management on a platform that’s unified with the retailer’s core systems,” says King. “Once those benefits are understood, it creates a key selling point, and there’s much more mobile innovation going on in the background.”

Which leads us back to Dad’s advice. The fundamentals always stay true, and ultimately, the core retail systems your customers run tomorrow will be consistent with what they’re running today. From an application performance perspective, nothing should change but the names — or in this case, the facilitators of the applications themselves. “My personal interests make me want to rush out and do all these cool things that can’t clearly be monetized for New West or our customers. We have to exercise more discipline than that. We have to do what we do now, do it well by leveraging our associates, most of whom have a decade or more of experience, and by taking advantage only of those new capabilities that create profit for us and meet a fundamental need for our customers.”